Kishore Khandavalli is an accomplished entrepreneur with over 25 years of experience in starting, scaling, acquiring as well as exiting from his ventures. He currently owns and runs several companies including iTech US, Inc., SevenTablets, RiseIT Solutions and iTech Data Services as their Chairman and CEO. He also heads an independent Board of Directors at RiseIT. His ability to lead companies toward success is unmatched in his field. As an award-winning entrepreneur and experienced keynote speaker, Mr. Khandavalli has a keen ability to steer and guide start-ups into successful enterprises.

He was named Ernst & Young Entrepreneur of the year in 2022. He was also recipient of Wells Fargo Asian Business leader finalist award in 2010. He is an avid flying enthusiast and a private pilot. He is an active member of Young Presidents Organization (YPO). He holds a Master’s degree in Chemical Engineering from the University of Akron, OH.

Before founding iTech in 2003, Mr. Khandavalli was President of Primesoft which he founded in 1997. Primesoft grew substantially by 2000 when it merged with Goldstone Technologies. He spearheaded the merger and subsequently led the combined organization until 2002. As the CEO of the combined companies, he expanded its operations into three continents with over 400 employees in three different continents.

Prior to venturing into the IT industry, Mr. Khandavalli worked as a research and development engineer at Enerfex, a technology think tank in Vermont. At Enerfex, he developed a unique patented technology to capture greenhouse gases and reuse them as industrial refrigerants. 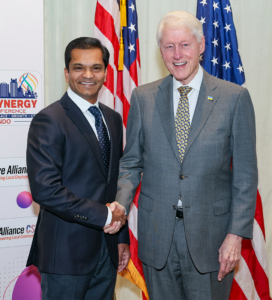 Our CEO with President
Clinton - 2022 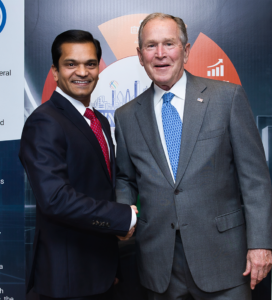 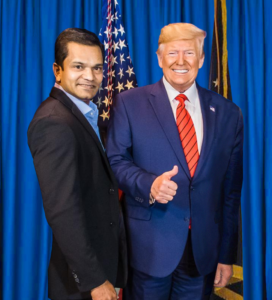